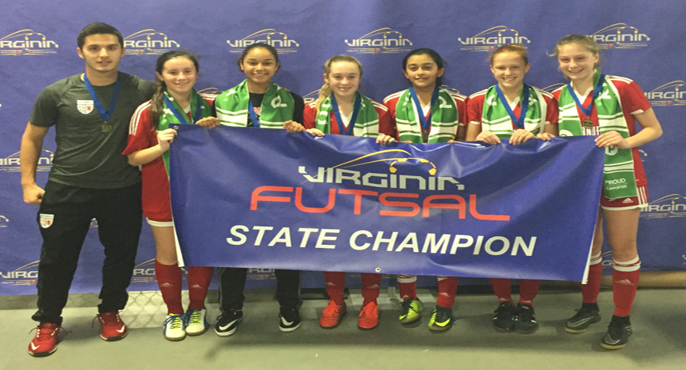 Over the January 14-15th weekend, the U12 Boys, U13 Boys, U13 Girls, U14 Girls and U15 Boys competed in the first ever State Futsal Championships in Manassas, Virginia at the United Sportsplex. All of our teams represented the club well with our U14 Girls capturing that State Cup Championship as the highlight of the weekend!

In what would prove to be the U14s toughest match of the day, the team went down by 2 goals with only 4 minutes remaining. The team dug in and played with passion and determination rallying to score 4 unanswered goals to go on and win 7- 5! Due to injury the team only had 1 sub the entire day! The team was undefeated on the day out scoring their opponents 20 - 8 and earning a birth to the Regional Futsal Tournament in Wildwood, NJ on Feb 17 - 20th.

Congratulations to the U14 Girls, State CHAMPIONS!!!